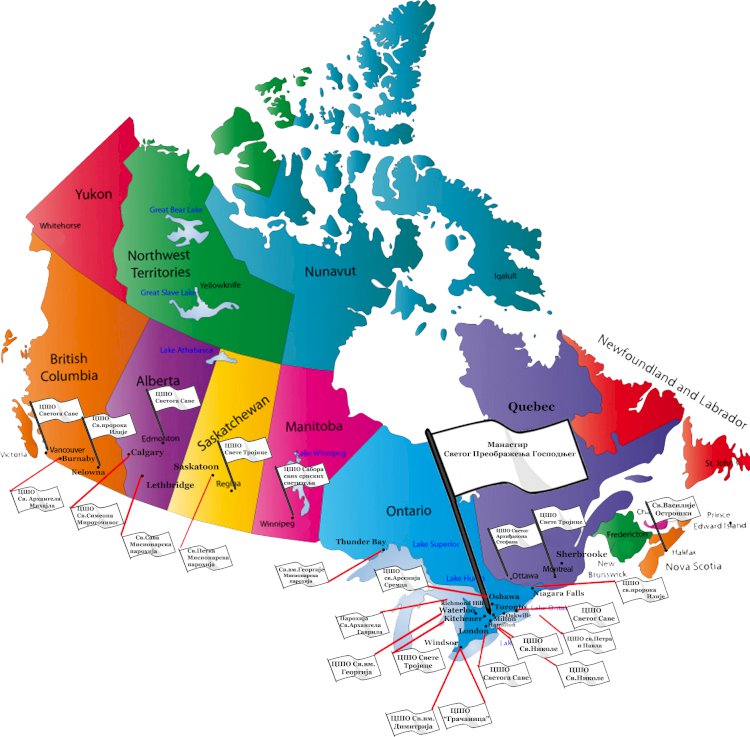 The Serbian Orthodox Diocese of Canada was founded by the Holy Assembly of Bishops od the SOC on May 26, 1983; all done at the initiative of then bishop of Eastern-america and Canada Christopher (Kovachevich).

Vladika Christopher was also the first administrator of the diocese until the election of a new bishop of Canada.

At its regular meeting on May 16, 1984, the Holy Assembly of Bishops elected singelios Georgije (Djokich), the confessor of Tavna monastery, as the first bishop of Canada. His Holiness the Serbian Patriarch German consecrated him to the rank of bishop on July 8th of the same year in the Cathedral of St. Michael the Archangel in Belgrade. On the feast of the Protection of the Most Holy Mother of God, October 14, 1984, bishop Georgije was enthroned in the Cathedral of St. Nicholas in Hamilton. (153 Nash Rd. S)

This was all the result of the trending growth in the Serbian population, and the resulting development of church life among Serbs in this vast country. The first Serbian Orthodox Church-School Congregation on Canadian soil was founded in 1912 in Regina (Saskatchewan) by imigrants mostly from Banat. The church in Regina was completed and consecrated in honour of the Most Holy Trinity in 1916. Serbs in Hamilton (Ontario) founded their congregation in 1913, and the temple dedicated to St. Nicholas the Wonderworker (on Beach St.)was consecrated on December 15, 1917. This temple was demolished when the local steel mill expanded its facilities and a beautiful new church was erected on Barton Street.

Church life for Serbs between the two world wars was marred by great difficulty in finding a method for clergy to serve in our churches and reach all of our newcomers. These problems are described in a letter which the first bishop of America and Canada Mardarije addressed to the Holy Synod of Bishops in 1934 stating, “We sent missionaries and monks, but not one of them was able to last more than two or three months. Married priests even less.” The bishop mentions the financial difficulties and also brings focus to the more pressing problem, probably hard to comprehend for those in Yugoslavia saying, “the Hamilton parish covers a territory much bigger than all of Yugoslavia. There are several small colonies of two or three Serbian families which are hundreds and thousands of kilometers apart. Our neighbouring parish, which is located as far away as Belgrade is to Stockholm, is in Regina, and is even more difficult to manage.”

The influx of Serbian immigrants after WWII gives birth to new communities in Windsor, Toronto and Niagara Falls (Ontario); Vancouver (British Columbia); Lethbridge (Alberta) and Montreal (Quebec). The year 1963 saw dramatic changes in the life of the SOC on the North American continent. For the first time in its history the Serbian Church is victim to a schism which lasts 29 years. The result of the schism is that a portion of the parishes separate themselves from the Mother Church, and under the leadership of bishop Dionisije form the Free Serbian Orthodox Church (later known as the New Grachanica Metropolitanate). Administrative changes are implemented among the parishes which remain loyal to Belgrade as well. The former Diocese of America and Canada is divied into three new eparchies: Central-Western American, Western American, and Eastern-American and Canadian.

The first bishop of the Diocese of Eastern-America and Canada was Stefan (Lastavica) who presided from 1963 to 1967. He is followed by bishop Sava (Vukovich), and from 1978 bishop Christopher (Kovachevich).

Since its founding, specifically since the enthronement of the first bishop of Canada in 1984, the Diocese of Canada has seen the consecrations of chapels in Ottawa, Missisauga, and the episcopal residence in Toronto; churches in Oshawa, Kitchener, Oakville, London, Calgary, Edmonton and Winnipeg; the church in Regina was renovated and fresoces were completed. Many church halls, rectories, and one retirement home (Windsor) were also constructed. The crown of all building endeavours was the Monastery of the Holy Transfiguration in Milton. The cornerstone of the first Serbian Orthodox monastery in Canada was blessed by His Holiness Serbian Patriarch Pavle on October 23, 1992. The monastery church was consecrated on June 12, 1994 and the living quarters and diocesan headquarters in February 1995.

The diocese also encompasses a Diocesan Serbian Sisters Association which was founded on February 2, 1985.

It is also noteworthy to mention the Benevolent Fund St. Tsar Lazarus which was granted the Order of St. Sava in 1996, by the Holy Synod of the SOC, for its contribution to humanitarian relief directed mostly toward the wartorn regions of Republika Srpska and Republika Srpska Krajina.

The Diocesan triannual newsletter Istochnik was launched in 1987. Soon thereafter a publishing house under the same name printed its first book, to be followed by tens of others.

The Serbian Orthodox Diocese of Canada encompasses the whole country with 33 parishes and missionary parishes. This includes the six parishes which until recently were numbered in the New Grachanica Metropolitanate, but since the full integration of the Constitution of the Serbian Orthodox Church in North and South America have become a part of the Canadian diocese. This is living proof that the act of canonical reunification was a God-pleasing event and that with one heart and one soul we celebrate the name of God in Canada.

By the decision of the Holy Assembly of Bishops of the Serbian Orthodox Church on May 20, 2015, bishop Georgije (Djokich) was permanently removed from his role as ruling hierarch and His Holiness Irinej, the Serbian Patriarch, was named as the administrator of the Diocese of Canada with all rights and duties of a ruling bishop.